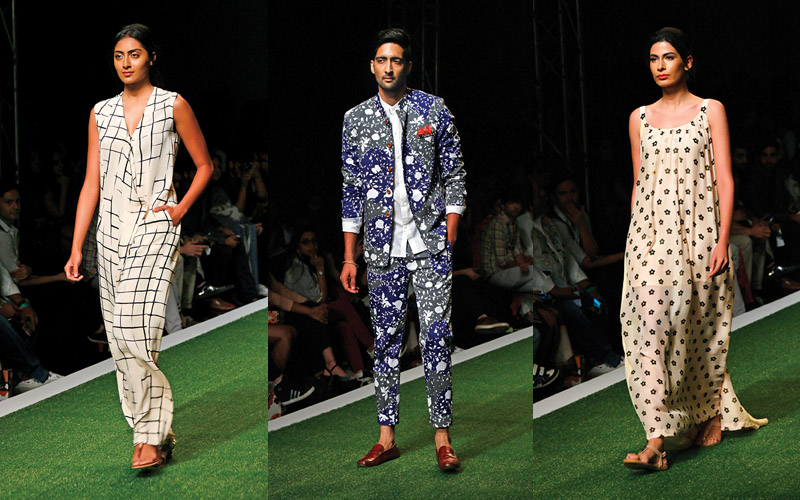 Abraxas NU recently caught up with one half of the designer duo of Dev R Nil for a quick interview.

How did you venture into fashion design?

I graduated from a fashion school and I just happened to meet Nil, my partner. People think that we are brothers or have been friends for a long time; that’s why we started a label together. But you know, it was very instant, an almost whimsical decision. So after almost 6 months of knowing each other, he said “Why don’t you start working with me?” and that’s how it all began.

When did you launch your label?

We launched it in 2004 and when we started we didn’t know who we are selling to. Because initially as kids, you don’t know what your market is, who is going to buy your creations, plus nobody knows you. So we designed a collection of western wear, since at that time Kolkata especially only had ethnic wear fashion. The designers before us were big names in Indian wear, like Sabyasachi or Anamika. So we thought, ‘let’s bring about some sort of a fresh fashion to Kolkata’ and that’s when we started doing swimwear; packed our bags, bought some really cheap plane tickets and literally just took off. We looked up some stores, fixed up appointments and went and opened our suitcases and started showing off our clothes. That’s when we got our first orders from these multi-designer stores. Down south actually, Bangalore was the first place.

How is Kolkata as a fashion destination?

Kolkata is fabulous as a fashion destination because we have very serious fashion, because the craftsmanship is very rich there, be it handloom be it embroidery and all the textiles. That’s why I think all the creators and designers there tend to utilise those fine crafts very beautifully in their collections and that actually brings about a very unique fashion from Kolkata, which is very different from let’s say, Delhi or Mumbai. And that’s why it’s a big destination – people come down just to shop from these designers, especially for weddings. And not only designers, there are so many other shops which sell very interesting fashion which is not just about bling or anything, it’s a lot to do with fabrics. Because fabric is the main master of any garment and that’s what people love about Kolkata.

What major differences have you have observed in the fashion sensibilities of Delhi, Bombay and Kolkata?

People can’t wear one type of fashion at one place. In Delhi, they love their flamboyance. Hence their garments have that appeal; very glamorous and rich.  They want variety.

Bombay has two sides. One side is very Bollywood-inspired which is very filmy and the other type is very casual. Even at parties they wear shorts!

Kolkata that way is slightly more traditional and very sophisticated. I think people there have a more classic taste and that’s the difference that I see mostly.

What is your design sensibility?

Kolkata has always influenced me. Be it the architecture, the painting and writings and even the philosophy is what inspires me all the time and those colonial buildings. You can say it is the hangover of the British era. And even in traditional fashion, they have that sort of thing about being very proper. So we sort of blend in with that. And also because we are very young and we started young, we like to bring about a freshness which is not that traditional. We like to balance it out that way.

So how has your design sensibility changed over the years?

When you are creating something you want to speak about your inspiration in a certain way. So over the last few years, what was not there previously, we’ve started seeing that story through embroidery and textures, as well as with the prints and the way we play with it. The patterns and the colours in the prints and blending of textures have changed and that has pretty much become my look, so to say. We don’t stick to a particular thing, earlier we were more on the formal side of clothing, now we are slowly getting into something which is more ready to wear and more prêt, which is the in thing. Everybody wants to be fashionable not only at weddings and parties but also in day-to-day life. So I think that’s how we’ve brought in collections slowly.

What is the general mistake made by women while trying to be a fashionista?

Well, to blindly follow what is in trend. Nowadays trends are everywhere and you think “Well if this colour is in or that sort of cut is in, so let me just wear them, because that’s the most in-thing”. And that’s the biggest mistake because then you’re not seeing what suits your body type and what looks nice on you. So all that put together is the biggest mistake one can make.

Is there any advice you would like to give women?

Don’t follow fashion blindly and don’t take fashion so seriously. Just know your style. That is the most important thing and that is what will make you different from other people.

What is fashion and what is style?

Well, fashion is frivolous, in a way. Today it is something, tomorrow it is something else. It is frivolous and whimsical to an extent. A style is more like a fashion which has of course gone through the test of time and has evolved. And as a person when you have evolved with your sense of fashion, that is what style is all about.

What is your style?

My style is very subdued actually. I don’t like flashy colours; I’m very boring when it comes to colours. When I actually pack, I see that my wardrobe is full of blues or whites and black. That’s it. But within that classic colour combination, I try to make it slightly casual; I can’t wear formals.

Who is your favourite designer?

Well you need to look up to people who inspire. So in India, I would say that I really like Rajesh Pratap Singh a lot.

What about amongst the newcomers?

Well we are planning to open another store, so we’re working on that.